Recently our directors visited the world’s largest trade fair for motorhomes and caravans, the Caravan Salon, in Düsseldorf, Germany. Here’s an update from Mary about the show.

I thought that since this was my second visit to the world’s biggest motorhome consumer trade show that the scale of the event wouldn’t knock me over like last time. Well I was wrong. You can’t help but be awestruck by 1,900 recreational vehicles displayed by 580 exhibitors in 190,000m2 of exhibition space (that’s 27 football fields) at Caravan Salon in Düsseldorf. There are 11 exhibition halls the size of the main one at Auckland’s ASB Showgrounds. And then there are the visitors. We were fortunate to get entry on the press day so we could move around but when the doors opened on the first public day, the crowds descended – nearly 200,000 people over the nine days of the exhibition. Most come with the intention of buying a recreational vehicle.

Caravan Salon is where all the major European manufacturers display their latest models. There is also a big representation of manufacturers of the base vehicles that motorhomes are built on, as well as those who make all the componentry that goes into a recreational vehicle. Then there’s also the latest accessories and state-of-the-art equipment, electronics and navigation systems, and information about the many European destinations keen to lure you. There’s even a hall for rare and collectible motorhomes and caravans.

Germany is Europe’s biggest market for recreational vehicles and while other European markets have been declining since the global financial crisis, sales in Germany have been growing. Most of the growth is in the cheaper entry-level segment of the market and in panel vans. Light and compact vans are all the rage. Major panel van manufacturer Pössl has commissioned a new production line and most of the base vehicle manufacturers like Mercedes Benz and Volkswagen have entered the market with their own panel van conversion. These come with all the basic equipment you need for a weekend getaway but a lot of emphasis has been put on aesthetics with lots of shiny surfaces and alloy wheels which appears to be about looking good cruising the city streets during the week. But the hefty price tag suggests they are targeting those with more money than the average punter. 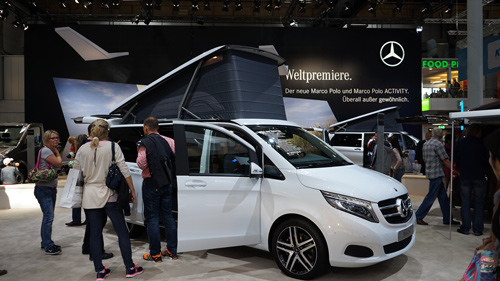 Those with a million dollars or more to spend had a few options to choose from including the motorhomes from high end niche manufacturers like VARIOmobil who produce only 15 vehicles per year. The 8m “Perfect” motorhome even comes with a classic sports car in the rear garage.

Many of the major manufacturers are focusing on their entry level models where demand is strong. Instead of producing dozens of layouts to appeal to all tastes they concentrate on the most popular layouts. Brands like Carado have invested millions in lean manufacturing to achieve the right balance between price and performance. There’s rationalization in the mid-range segment of the market as well. Instead of providing numerous upholstery options, customers can personalize their interior with seatback cushions that are zipped in place so they can be quickly and easily changed. When it comes to low cost manufacturing, not all were able to maintain the high quality of workmanship.

Gone are the days when you could select the motorhome you want and specify your preferred base vehicle. You can choose from Ducato or Ducato. The Fiat Ducato continues to dominate the motorhome conversion market with 75% market share. The brand new sixth generation Ducato was rolled out at the exhibition no doubt trying to combat an attempt by the Ford Transit to take some market share. Since both the Ducato and Transit are front wheel drive, that’s what everyone buys. 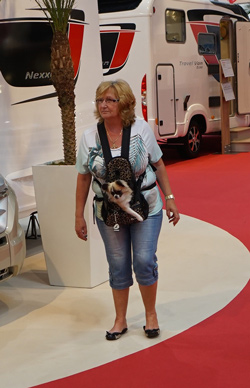 While the recreational vehicles were fascinating and the beer and pretzels delicious, the people watching was nearly as interesting. Every European and his dog – walking or being carried. I’m not sure we would ever see this at a NZ motorhome show!

The next big New Zealand show is the Camper Care New Zealand Motorhome & Caravan Show in Christchurch from 7-9 November 2014. We’ll be there – if you’re at the show, come along to the SmartRV stand and stay hi to our team!