Entry Door on the Wrong Side? 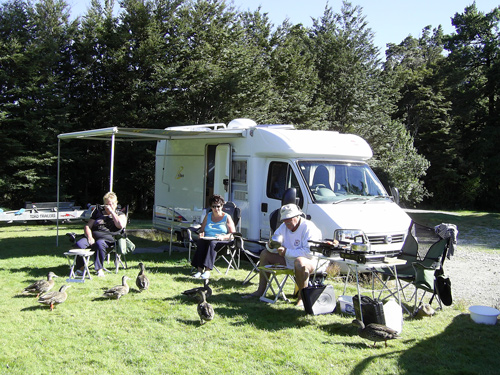 Bruce and Tina Higgs don't have your typical story of being long time motorhomers - they are relatively late entrants. In 2007 a chance visit to a motorhome sales yard and a look over a Bürstner T585 changed their thinking somewhat. Based on a Fiat Ducato cab chassis, the B class motorhome had a dinette behind the passenger seat and a small kitchen behind the driver's seat.

In the rear, the main bed fitted into the nearside corner allowing space for a small bathroom with separate shower in the opposite corner.  It was a relatively new layout for NZ and we'll let Bruce and Tina take up the story.

"We spent some time inspecting the motorhome from front to rear and concluded that if in the future we decided to embrace the lifestyle, then this would be the type of motorhome we would purchase. This decision was made even though the motorhome entry door was on the so called "wrong side".  About 2 years later we saw the exact same vehicle advertised for sale and decided that the time was right, so we purchased our first motorhome. What an exciting moment it was!"

Even though we were both working full time we tried to get away as often as we could and explore places that previously we had just driven straight past.  We joined the

With the motorhome, we discovered that most of the time we were parked up at great camping spots therefore the positioning of the door was not an issue.  It took a little bit of convincing but most folk we talked to could see that this was a small price to pay when considered in tandem with the quality and fit out of a European motorhome.

The way we looked at it was that if you were parked in a narrow or busy street and wanted to leave the motorhome on the kerbside, you just exited via the passenger's front door if necessary. Leaving the front seat in free swivelling mode does make that easier.   The cabin door on the “wrong side” is really no different to using the driver and rear passenger doors in a normal vehicle.

A couple of years later we saw a new Burstner Solano t725 advertised which had an island bed rather than the corner bed of the T585, so we decided that we would upgrade. We were now the owners of 2 motorhomes (one each!) but it did not take long for the first to sell. 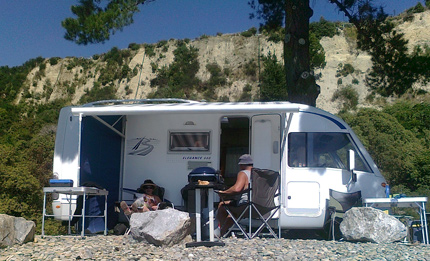 It might sound like we were changing motorhomes regularly but a trip to Europe was looming so our second Bürstner was sold. On the return from our travels we purchased a used Bürstner Elegance i660 which had a French (corner) bed in the rear and a double drop down bed above the cab at the front. This was a great motorhome which also had an awning/annex off the entrance door giving plenty of room to park items like the grandkid's bikes, bbq and camping chairs and practical extra living space.

With my retirement our ultimate goal was to own a Bürstner Elegance i800 so when a near new
motorhome became available at Smart Motorhomes we took the opportunity and made the
purchase. This motorhome gave us an island bed, split bathroom, nice kitchen, lounge to seat 6
people, a drop down bed for the grandkids and a huge garage for the toys. Having the 3.0 litre turbo
diesel engine with six speed auto transmission makes it a pleasure to drive. Again we were the
owners of 2 Motorhomes but in less than 6 weeks our third motorhome had been sold.

As might be guessed, any doubts about owning a motorhome with the door on the "wrong" side had
been well and truly dispelled. We have never had a problem living in any of our motorhomes nor
selling them to new owners. 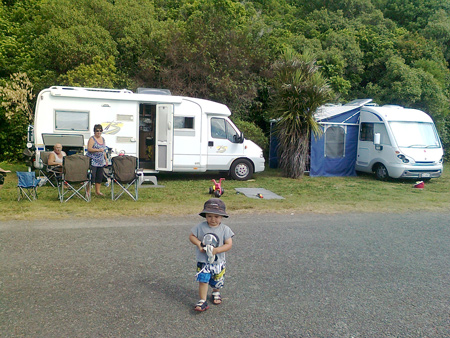 To be honest the "door thing" has never been an issue - what has always been my priority has been
to watch where I am parking with the front wheel drive vehicle. On our travels, we mainly stick to
sealed roads but have ventured into the unknown. On a trip from Blenheim to Christchurch we decided we would turn into every road that came up on our left and this took us out to some interesting places on the east coast. We like being near the sea or by a river and mainly freedom camp.

We love our well appointed Burstner motorhome and the motorhome lifestyle. Given this is now our
fourth, what makes us even happier is that depreciation has been negligible - an important factor for
any purchaser.