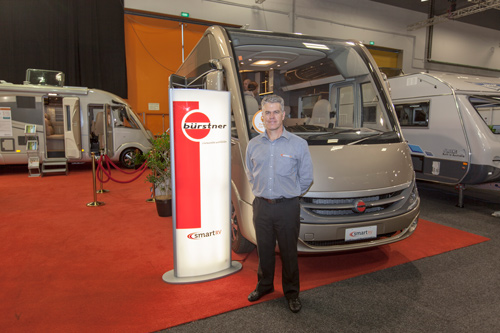 Leaping into the unknown with gusto is nothing new to SmartRV’s new Christchurch sales leader Pieter Koekemoer. It’s something he’s been doing since the earliest days of his career, literally, first as one of a chosen few in South Africa’s elite parachute unit, the Pathfinders, where he later served as an instructor.

Now several leaps later finds him full of passion and enthusiasm for both his adopted country and his latest challenge with SmartRV, a brand he describes as “in a class that sells itself”.

Born in Namibia, raised in South Africa, Pieter went from the military to the formidable field of private security, eventually setting up his own large firm in RSA. Pieter trained and managed up to 250 staff, running a fleet of armed response units protecting private property and wildlife reserves, a 24/7 operation.

In 2008, Pieter and his wife Deidre made what he calls an LSD trip (Look, See and Decide) to New Zealand in search of a different life for their family. They loved what they saw and soon took another great leap when Pieter got a job offer in Christchurch, arriving with their young daughters Kayla and Imke (now 15 and 11) in 2009. The earthquakes shortly after actually served to cement the bond with their new country.

“So many stories really touched and changed our hearts – we even support the All Blacks now,’ Pieter proclaims proudly. “The girls are Kiwi girls now. And living here we’ve got everything; skiing, the sea, rivers, great fishing and biking.”

Pieter’s enthusiasm for the outdoors combined with his deep technical knowledge makes him a natural fit for the SmartRV family, even if he’s not keen to share details of his favourite fishing spot. (“Lewis Pass” is as much as he’ll divulge.)

In fact, you could say that characteristically, Pieter jumped straight in – joining the SmartRV team on the floor at the recent Auckland Motorhome & Caravan Supershow the very next day after he flew up to Auckland for his job interview. But the initiation wasn’t daunting for someone with his professional background.

“I didn’t know much about the motorhome industry when I went with SmartRV to the show,” he admits with a laugh, “but I understand the value of listening. I have a lot of experience in customer relations and I really enjoy finding the right solution for people.”

Pieter’s clearly relishing the learning curve and is bursting with ideas to build SmartRV’s brand awareness in the South Island through networking and fostering his connections. “It’s great to be with such an established and dynamic brand,” he notes, adding, “The quality of the product means a lot of the hard work is already done.”

SmartRV looks set to be Pieter’s next leap forward.