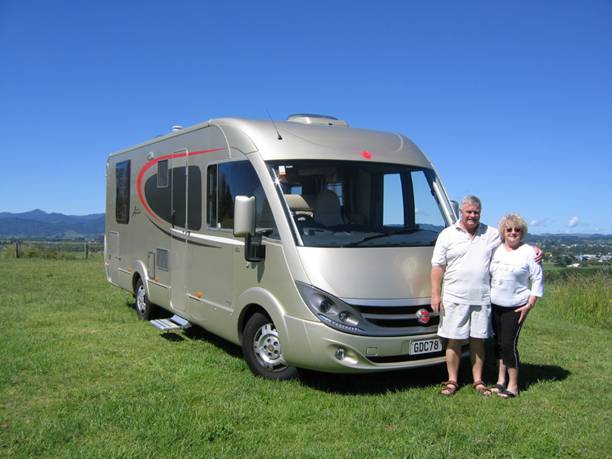 The pun is irresistible but there are plenty of other reasons to call John and Norma one of our very ‘Keen’ camping couples. The Keens embraced caravanning while living in Australia. After more than a decade over the ditch, bought their own caravan to make a farewell circumnavigation tour, including Tasmania, before returning home to New Zealand.

Once resettled in Tauranga, the Keens got their first motorhome and found themselves so hooked on the lifestyle, they were soon looking to upgrade. It was a Bürstner Aviano from SmartRV that ticked all their boxes.

They love the versatility and spaciousness, with John even calling it his ‘mancave’ because there’s so much room for golf clubs, bbq, bicycles, fishing rods and other al fresco essentials. Norma loves the styling and thoughtful layout, with its rear island bed, separate shower and toilet, swivelling passenger and driver seats and the extra queen bed tucked in the cab ceiling. A German tourist they met on the road told them Avianos are known at home as ‘palaces’ – and the Keens could not agree more.

John and Norma also agree that SmartRV has more than met their expectations. "From day one, it’s been great," enthuses John, "with the best after sales service we have ever encountered." "I can’t praise this company enough," adds Norma. "If we ever do change motorhomes, it will be another Bürstner from SmartRV."

Their current model is the Bürstner A-class Aviano i727 – 7.6 metres long, powered by a 3.0 litre turbo diesel engine that John has found smooth to drive.

The Keens have made good use of their Aviano, touring for a couple of months around the Wairarapa, the Coromandel and joining a group outing to a country music festival in Hastings. "We’re getting itchy feet again," says John and with ‘palace’ at their service, all the Keens need is a new destination.